A practical example of error correction

How is it that a CD with so many scratches on it can still be played continuously with few audible errors? Why is it that a QR-code read incorrectly can still reveal the right information?

In other words, how can a CD-player or QR-code reader take a data stream with so many errors and correct most of them? This is where error correcting codes (a topic within Coding Theory) come into play.

However, my friend may receive this message as corrupted as (flipped bits are marked in \(\textcolor{red}{\verb!red!}\)):

Converting this transmitted message back to a string doesn’t even resemble a word! Over noisy mediums, error rates, like one-in-six ratio as in the example, are very common. Using check bits, however, we can devise of a simple way to detect an error (but not correct it).

Suppose that I send a message composed of three bits and a parity bit which is calculated by adding all the previous bits in the binary field \(\textbf{B} = \{0, 1\}\):

Such a scheme can detect only one error: Suppose that the message \(0100\) is received, then the receiver can perform a simple calculation to see that the number of \(1\)s in the first three bits is congruent to the parity bit in B. However, this particular scheme cannot detect two errors because the parity bit would not help in detecting an error3. The recipient of the data can only ask for a re-transmission in this scheme, an expensive and sometimes infeasible task.

With certain modifications, augmentations, and more complex calculations, schemes based solely on parity bits can detect a great deal of errors. Generally, the information rate for parity bit schemes is \(R:=\frac{n - 1}{n}\) where \(n\) is the length of the message4. However, this high information rate comes at the cost of not detecting a great deal of possible errors. These types of error-detecting schemes are widely implemented in ISBN numbers, bar-code scanners, and other noise-prone applications where re-scanning is a viable option.

In some situations, like reading a CD or in QR codes, detecting an error is simply not a viable choice as a corrupted bit cannot just be labeled as incorrect and subsequently discarded as the information may be vital. Here, error correction is important.

Coding Theory deals with the creation and analysis of efficient error-correction schemes to ensure that messages transmitted over noisy channels are properly received.

Finally, I include a useful graphic which outlines the procedure of error correction across noisy channels. A message is encoded into a codeword, transmitted across a noisy channel, and then decoded and corrected by the recipient. 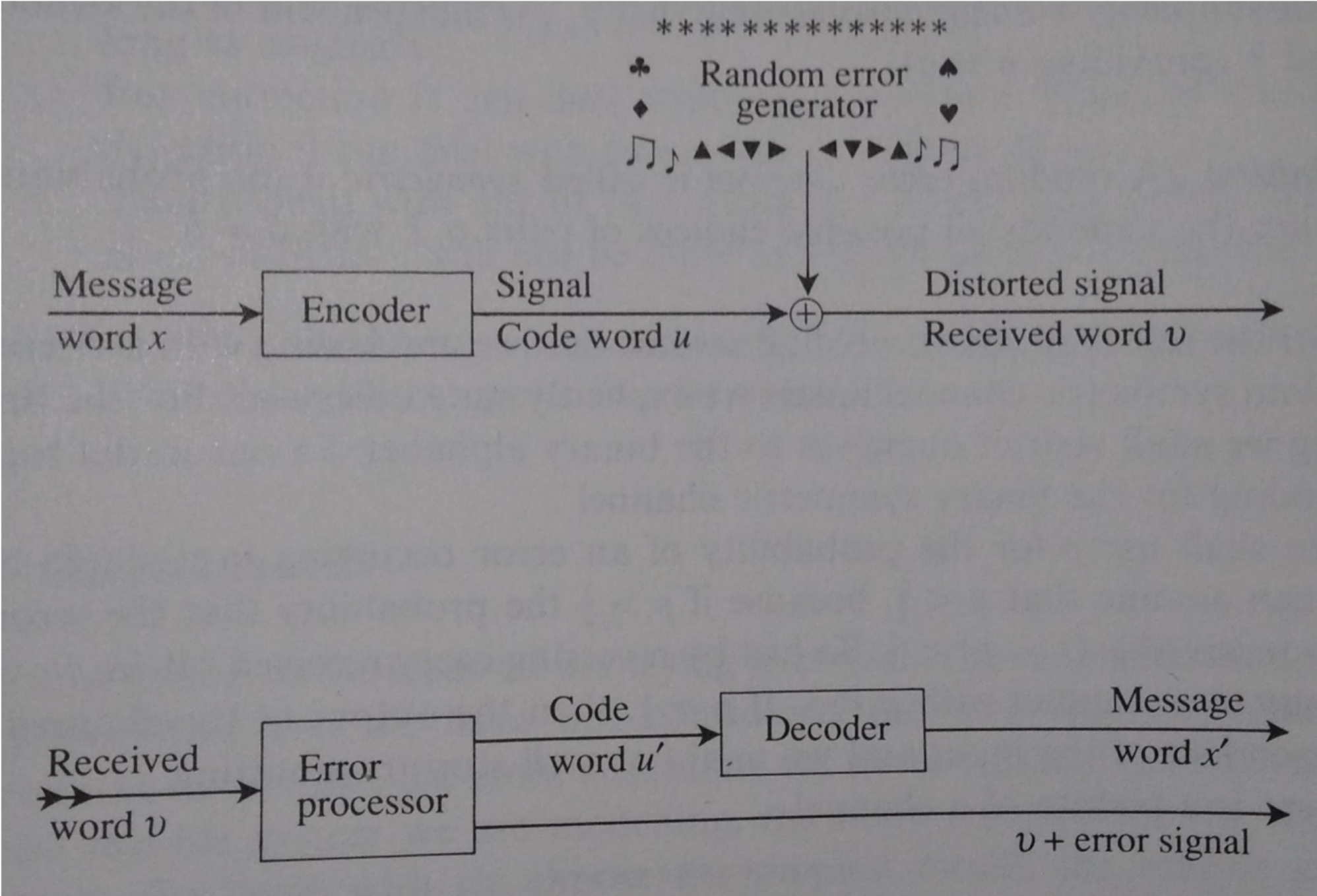 In this paper, I hope to effectively outline the use of Bose-Chaudhuri-Hocquenghem (BCH) codes which form a class of cyclic error-correcting codes constructed in finite fields.

In the examples used in this paper, I will discuss the Galois field containing 16 elements notated as \(\textbf{GF}(16)\).

We indulge in one more definition:

In error-correction schemes, when receiving a message vector in a noisy channel, say \(t = (t_1, \ldots, t_n)\), we are looking in the set of possible code words \(C\) to see what vector \(v\) in \(C\) has the smallest Hamming distance to \(t\). Then, this vector \(v\) is likely to be our intended message vector. In other words, we are trying to see what the message \(t\) is most likely trying to represent from \(C\).

Alphabets used in error-correction schemes are usually constrained to \(256\) bits because they can represent all the common characters used in electronic communications. This leads to using a finite field of \(256\) elements. Here, we give a more formal definition of finite fields.

We cannot use integers in our construction of our finite field as they do not satisfy the cancellation law9 under non-prime modulo. So, we must use polynomials because they satisfy the required arithmetic properties.

Polynomial multiplication is a little more involved and is covered in more detail soon.

Constructing a finite field with polynomials

Now, to actually construct the field, we compute a table by multiplying the polynomial representations of each binary number from the rows and columns together to form a cell: 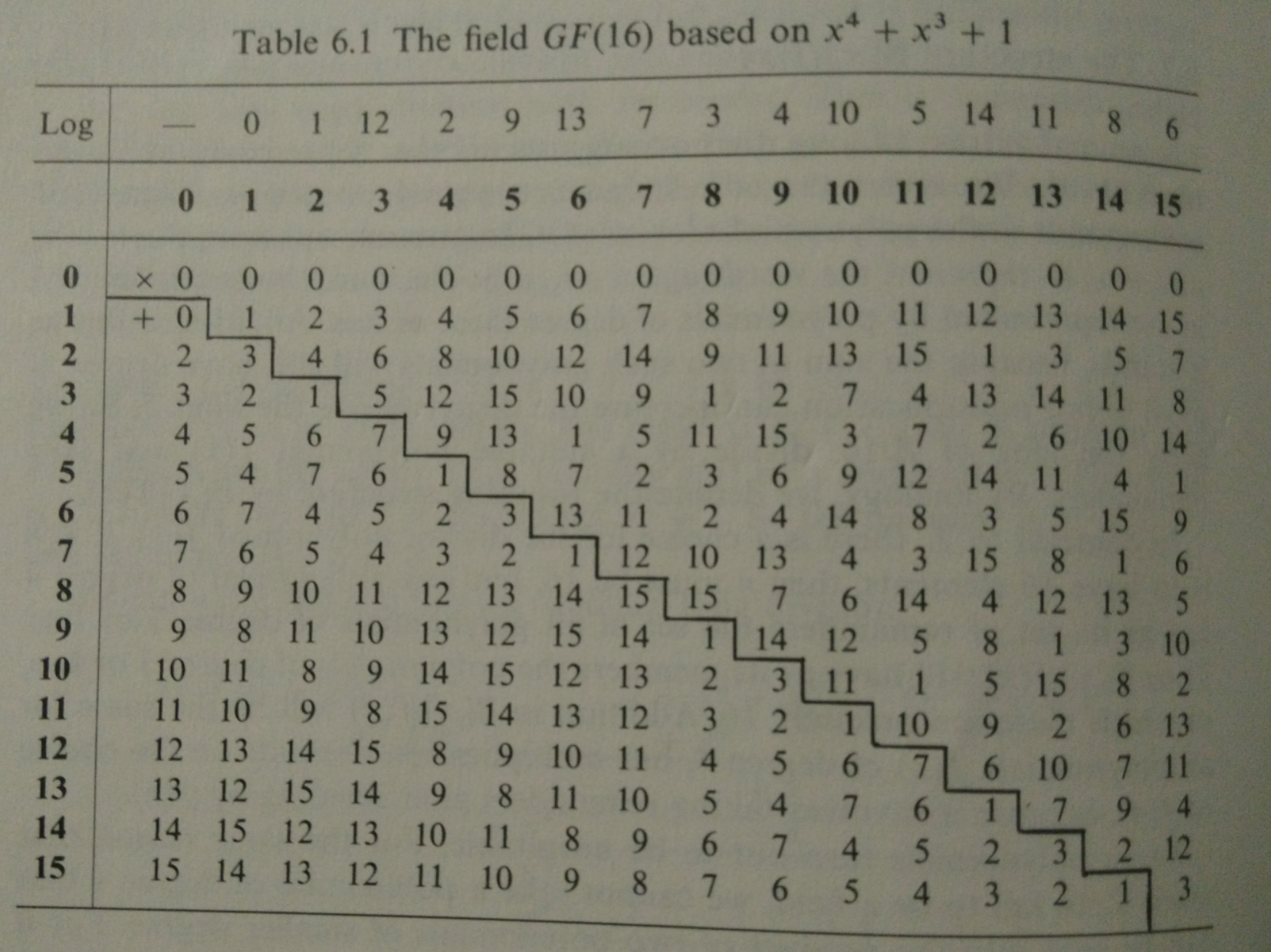 To develop a BCH code, we use all of the knowledge we have outlined above. Given a binary message expressed as a polynomial called \(u(x)\), we can map it to an encoded code word \(c(x)\) that lies in the set of valid BCH code words12. We then convert \(c(x)\) to binary and transmit across a noisy channel.

The receiver will then perform various polynomial operations, calculate syndromes (yet to be discussed), and linear algebra row-reduction to eventually calculate where the corrupted bits are.

the number of information bits that can be transmitted.

the number of check bits needed to correct the \(3\) errors we expect to introduce to our \(15\) bit overall message. The designed minimum distance in this code is \(7\) which is a requirement to correct \(3\) errors15.

Now, given a primitive element \(\alpha\), we can find various minimal polynomials16 \(\phi_j(x)\) for each power of \(\alpha\) given below.

Encoding our message into a codeword of BCH

Decoding and error correction in BCH

Before delving in the decoding and error correction of our sample BCH code, we should discuss the structure of these codes.

To decode binary codes in BCH, we must use the elements of GF(16) to number the positions of a codeword. For a vector \(r\) or length \(n\), the numbering is illustrated as such:

Finally, the roots of this polynomial are equivalent to the roots of the inverses of the error locations in \(r(x)\). Finally, we can make the following relation between the coefficients of \(\sigma(x)\) and the syndromes as such.

In this example, we will use the PGZ decoder.

Now, knowing the six syndrome values for the received message \(r\), we can proceed to use the Peterson–-Gorenstein–-Zierler algorithm to find the error locations of \(r\).

The decoding problem with BCH is that the number of errors in a message \(r\) are unknown to a recipient.

Because the \(\sigma_i\) values below are the inverses of the error positions, we must find the solution to the matrix equation:

Let us calculate this determinant:

These powers of these inverses in fact correspond to error positions as such:

These terms are identical to the terms of the error polynomial \(e(x) = x^{12} + x^6 + 1\). To the receiver, who has just calculated this error polynomial for him/herself, the corresponding bits (12th, 6th, and 1st) are flipped24 to recover the original message. The final step is completed by adding the two vectors/polynomials25.

Now, the original message is the first five bits 10110. This message has been recovered, without error, due to this implementation of a BCH code. The information rate for this \((15, 5, 7)\)BCH code is

The decoding and error correction segment of this algorithm is essentially a way to find the BCH code word that has a minimum distance to the received vector \(r\). This code word (in the set of BCH code words) then must be the intended sent code word before an error acted upon it.

For example, our example of a 5-bit message (\(10110\))is not longer constrained to 0s and 1s. Now, we can send messages in the set GF(16). Conveniently, data in computers is commonly represented in hex-code (in base 16) so we can send a string of data with 16 times more information!

In this paper, we have discussed Coding Theory, finite/Galois fields (and their various properties), polynomial arithmetic in these fields, and a complete example of BCH codes. 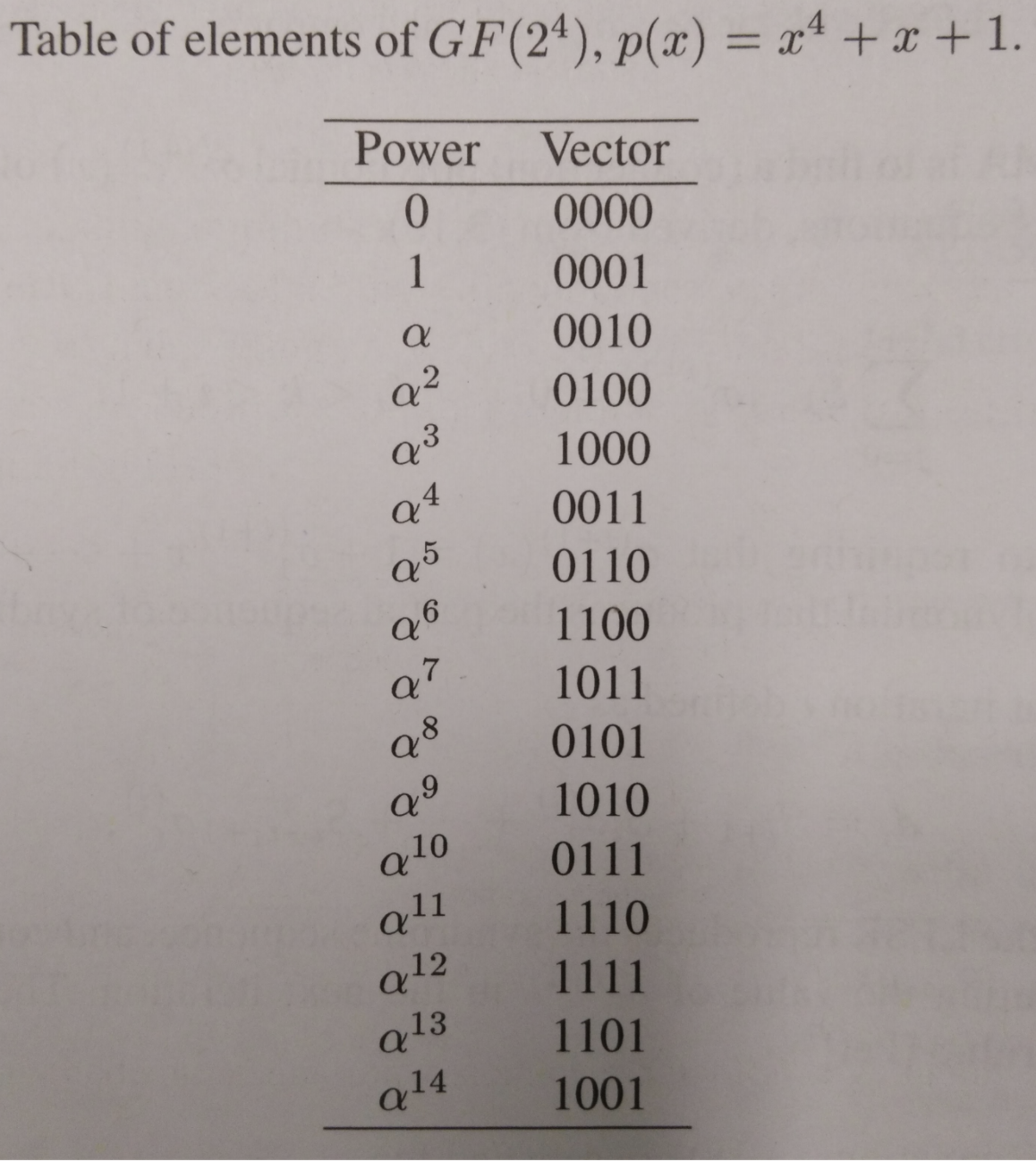